BENGALURU:Kenkre FC put up an impressive display of grit and determination to win their opening Group B encounter against Kerala United FC (KUFC) at the Bangalore Football Stadium. After going 1-0 behind early in the second half with a goal from winger Bujair Valiyattu, Kenkre FC came from behind to register a 2-1 victory over KUFC, thanks to goals from substitute Lester Fernandez and striker Ranjeet Singh. The win sends Kenkre FC at the top of Group B, with the remaining matches in the group yet to kick-off.

The match began with both teams going through the motions to grow into the game in the first ten minutes, as KUFC implemented a rigorous high press to try and win the ball back high up the pitch. In the 7th minute, KUFC left back Munmum Lugun had the first sighting of goal as he took on a shot from distance that drew the first save of the game from Kenkre FC goalkeeper Tenzin Samdup.

Kenkre FC had their first crack at goal in the 12th minute, after winning a free-kick in a promising position 20 yards from goal. Aravind Rajan stepped up to take the set piece for Kenkre, but the KUFC wall combined to block the direct free-kick.

By the 15th minute into the game, KUFC midfielders Akhil P and Adersh Mattummal were dominating proceedings for the side from Kerala. In the heart of the KUFC defence, Gabriel Lima remained a towering presence as he continued to diffuse opposition attacks, and initiated passing moves from the back.

As both teams tried to play through the middle and keep the ball, both midfields were working hard to win the ball back for their respective teams time and time again. Overall, the first half remained a fairly scrappy affair, as both teams went back and forth at each other. Kiran Pandhare tried to get on the ball for Kenkre and dictate play for his team from the heart of midfield.

In the 29th minute, the play was called to a halt for one minute by the referee for a cooling break. This has been a new post-pandemic introduction into the domestic game, which teams often use to regroup after the first phase of the match. KUFC immediately upped the ante after the cooling break, restarting play with a renewed attacking vigour. In the 31st minute, KUFC winger Bujair Valiyattu fashioned an excellent opportunity for himself, as he received a pass from Adersh and came onto his favoured left foot to take a shot from just inside the box. After creating a shooting opportunity, Bujair placed his fierce low drive just towards the wrong side of the near post.

Kerala United made the first breakthrough three minutes after half time, as they eventually added final product to their promising patterns of play. As Akhil P fed the ball out to the left flank, Salman K found himself in space to produce a good cross, which was flicked on at the near post by Nimshad Roshan. Bujair Valiyattu timed his run perfectly to come in at the far post and rifle the ball high into Tenzin’s goal to make it 1-0 for Kerala United.

As KUFC took charge in the game and looked likely to add to their advantage, Kenkre FC were helped by the introduction of substitute Lester Fernandez, who brought a measure of experience and composure to Kenkre’s play. Fernandez expertly slotted away a penalty for Kenkre FC in the 65th minute, after Gabriel Lima gave away a foul inside the box with a mistimed lunging tackle.

After coming back on level terms, Kenkre FC made it a double whammy seven minutes later in the 72nd minute to turn the game around after going behind. Aravind Rajan sent in a peach of a low cross from the right flank after a fast flowing move, which Ranjeet Singh finished from close range to give Kenkre FC a 2-1 lead to hold onto for the remainder of the game. 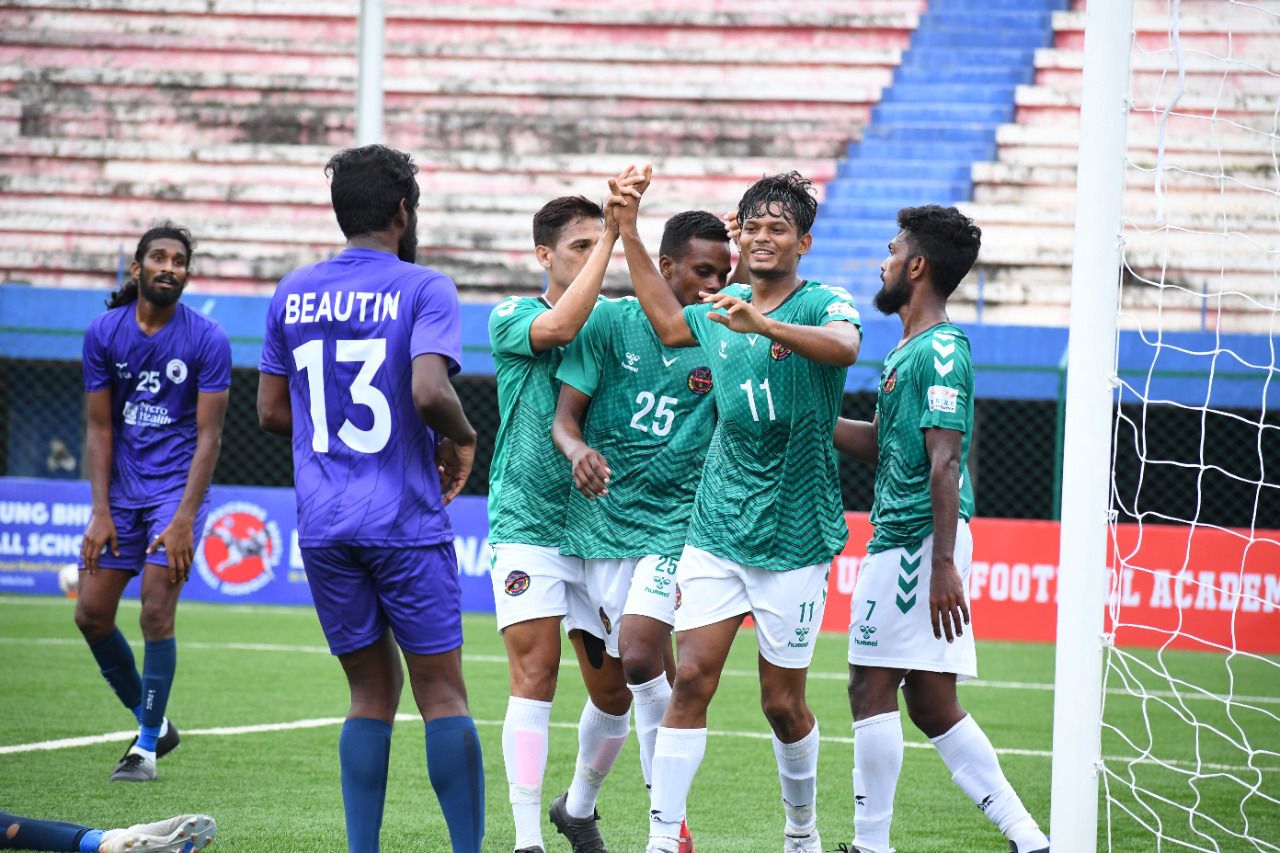 Kenkre FC proved to be a resolute defensive unit for the final 15 minutes of the game, as they held on to the slender one goal lead in the face of continuous pressure from the KUFC ranks towards the end of the game. As KUFC dominated the ball and continued to try and force the issue, they were largely confined to chances from set-plays and attempts from range, as the Kerala side struggled to break down the Kenkre FC defence.

That match finished with a 2-1 win for the side from Maharashtra, leaving it all to do for KUFC for the rest of the group stage matches. Kenkre FC will now look forward to their next encounter against ARA FC on October 9, 2021.