BENGALURU: The second match in Group A saw a faceoff between Rajasthan United FC (RUFC) and FC Bengaluru United (FCBU) at the Bangalore Football Stadium today.

A back and forth game between both teams saw Bengaluru United enjoy a solid first half, while the team from Rajasthan came back in the second period to draw level by outplaying their opponents for a large part of the game. The match finished 1-1, with FCBU defender Kinshuk Debnath facing ejection after a red card in the 86th minute.

The match began with both teams feeling each other out in the first ten minutes, but Bengaluru United started to grow more into the game progressively as they got hold of more of the ball. As Bengaluru United looked to build out from the back, the team looked confident of looking after the ball and using the whole length and breadth of the pitch.

Rajasthan United looked to follow a set game plan which showed signs of a strategy that involved keeping the score at 0-0 in the opening period and not conceding an early goal. As the game progressed RUFC dug in and gave a good account of themselves against difficult opposition. They looked to attack Bengaluru United with long vertical passes to transition from defence into attack at high speed. RUFC had some promising moments where it looked like they could release either winger; Dilliram Sanyasi or Aman Thapa, but they lacked the final quality of pass that would have put the wingers through on goal.

The game moved in ebbs and flows early on, and sprung into life towards the latter end of the first half. FCBU’s fancied Spanish striker Pedro Manzi began to get a look of more of the ball in promising situations in the opponent’s half. However, it was his strike partner Luka Majcen who had the first real chance of the game, as FCBU winger Gopi flighted in a looping cross from the right wing which was met by the late-arriving Slovenian, who produced a first time volley towards the near post. The shot was saved with an agile dive towards the ball by goalkeeper Vishal Joon.

The breakthrough came in the 41st minute of the game from an FCBU set piece opportunity. After winning a free kick in a promising position on the left flank, Sanju Pradhan delivered a precise cross which was directed goalwards by Luka Majcen. After Vishal Joon saved the initial attempt, Pedro Manzi followed up to finish the rebound by putting the ball high into the roof of the net. This came as the former Hero I-League Golden Boot winner’s first goal of HILQ 2021. 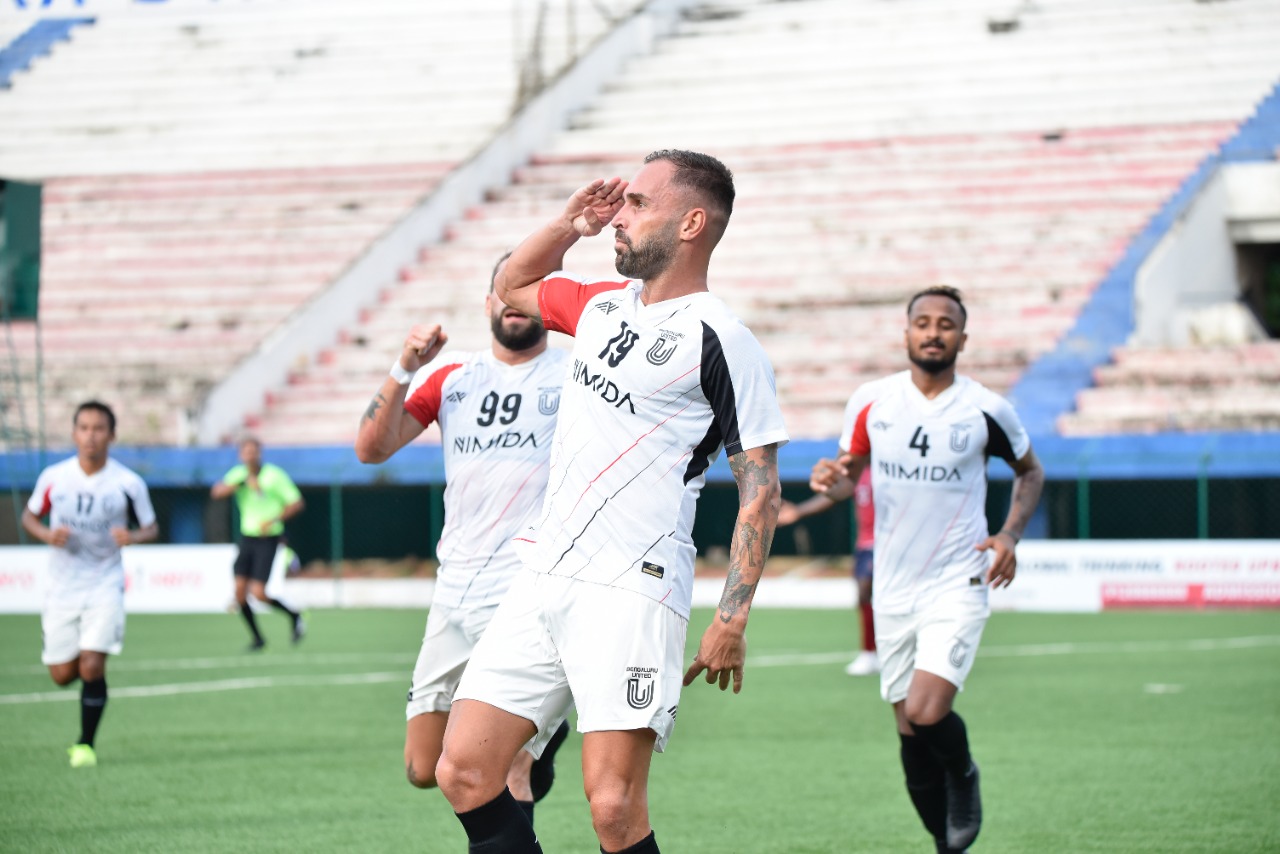 RUFC looked to direct its attack on the Bengaluru United goal through their wings, with their wide players looking the most likely to find an opening. At the stroke of half time, RUFC built a well coordinated move up the pitch which saw all their attacking players combine smoothly. They could not find a scoring opportunity, but the play must have given the team an understanding of how to approach the second half.

Ten minutes after the restart, RUFC came agonisingly close to scoring an equalising goal from a set piece of their own this time. As Aman Thapa delivered a fantastically shaped cross towards the 6 yard box, it was begging for a final touch from an RUFC player to put the ball home. Instead, the ball bounced out tantalisingly for another corner kick.

Much like proceedings in the first half, the game went through a lull for a brief period, before springing back into action when Rajasthan United equalised through their striker Sukhjit Singh in the 78th minute. The goal came from a move that was begun by Aman Thapa, as the Rajasthan United number 7 seemed to cause Bengaluru United’s backline all sorts of trouble. He combined well to drive the ball up the field and feed Sukhjit Singh, who came onto his left foot to take a shot that took a wicked deflection off an FCBU player, leaving goalkeeper Kunzang Bhutia completely wrong footed. RUFC got the slice of luck with the deflection, but the side richly deserved their goal for their thorough domination throughout the second half. 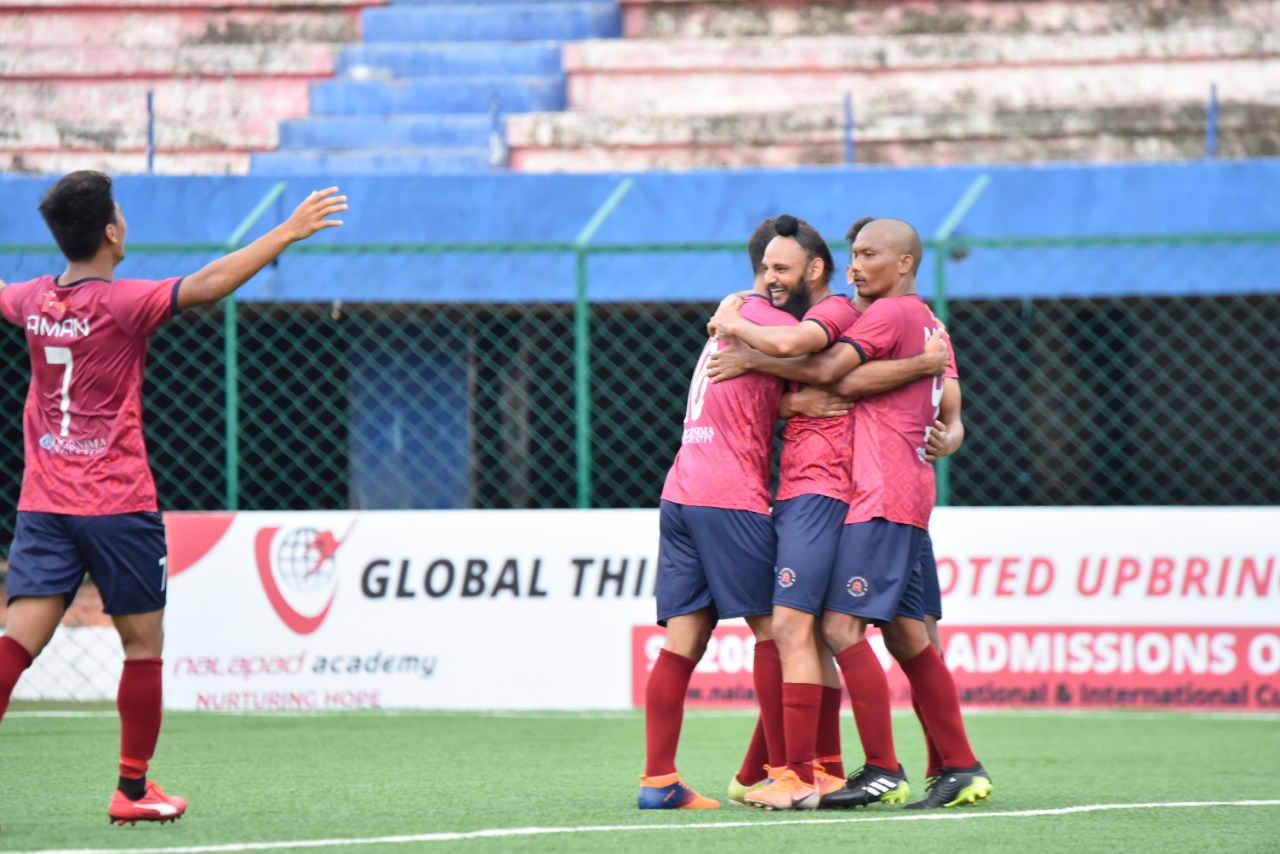 The restored parity set up an exciting end to the game for the final few minutes, but things turned from bad to worse for FCBU when veteran centre back Kinshuk Debnath got a red card for hampering an opposition player when he was through on goal. From the resultant free kick within range of goal, Aman Thapa drew a smart save from keeper Kunzang Bhutia, who tipped a fierce shot over the bar.

Down to 10 men, FCBU looked to not only protect their one point, but also made efforts to grab all three through opportunistic attempts of their own.

Pedro Manzi got a half chance from a near post header, which drew a reaction save from Vishal Joon, who steered the danger clear. The match finished with both teams having their respective strong phases in the game, which eventually led to them cancelling each other out.

Rajasthan United remain in a favourable position on top of Group A with four points from two matches, while FC Bengaluru United have ground to make up.