Published on: 30-Sep-2021
Painful defeat in Lisbon .. ..
A disappointing night at the Stadium of Light as the blaugrana suffer a second Champions League loss.
Barça have suffered a second defeat in two games and from now on can’t afford any more slip-ups if they are to progress from Champions League Group E. Ronald Koeman’s former club, Benfica, took an early lead and although the Catalans had a host of opportunities to get back into the game, the Portuguese side were eventually able to build on that lead in the second half.
The result leaves Barça bottom of the group for the time being, but there’s a lot more football to be played, beginning with back-to-back games with Dynamo Kyiv on October 20 and November 2.
Early setback

Buoyed by an infectious atmosphere inside the Stadium of Light, the home side flew at Barça and Darwin Nuñez fired them into the lead after just two minutes. A finely crafted and finished goal by the Uruguayan, but anything but the start that Barça needed.

The blaugrana response was immediate. For all the remainder of the first half the big plays were all in the direction of the Portuguese goal and it is difficult to fathom how not one of them ended with the ball in the back of the net.

Frenkie de Jong, on the night of his 100th appearance for the club, set up his compatriot and namesake Luuk twice to no avail. Frenkie had a couple of pops of his own and there were fine chances for Pedri and Memphis too, but Barça were still trailing at the break.

That wasn't for lack of chances, but none of them had hit the target, and sadly that statistic wasn’t going to change after the break.

Other than the goal, Benfica may have battled hard and well to keep the Catalans at bay, but they’d created very little threat of their own. They found new verve in the second half and the closest of a number of chances in quick succession came when Nuñez caught Ter Stegen well off his line and ended up hitting the post.

That had been a let-off, but on 68 minutes Benfica did stretch their lead. Barça had lacking their tight shape of the first half and an unmarked Rafa Silva was able to convert the rebound after a previous effort had been cleared.

And there was further woe ten minutes later when Sergiño Dest handled in the area and Darwin Nuñez poked the penalty home. Benfica had only scored once in their last six meetings with Barça, but tonight they had three.

Meanwhile, for Barça it was the first time they had lost their first two games of a European campaign since losing twice to FC Porto in 1972.

To rub salt into the wounds, Barça played the final minutes with ten men after Eric Garcia was red-carded, but by that stage the game was already looking like a lost cause. 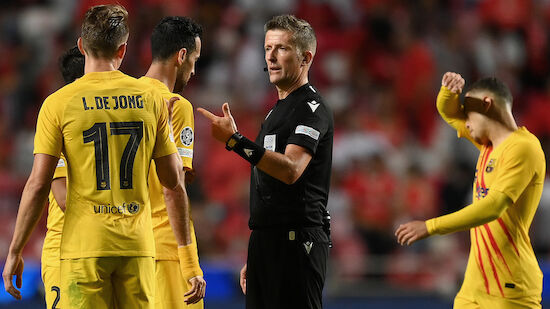 In the other game in Group E, Bayern Munich thrashed Dynamo 5-0, with Lewandowski scoring twice in the first half, and Gnarby, Saneand Choupo-Moting adding three more in the second. The result leaves the Germans flying high with six points, Benfica have four, Dynamo one and Barça none.